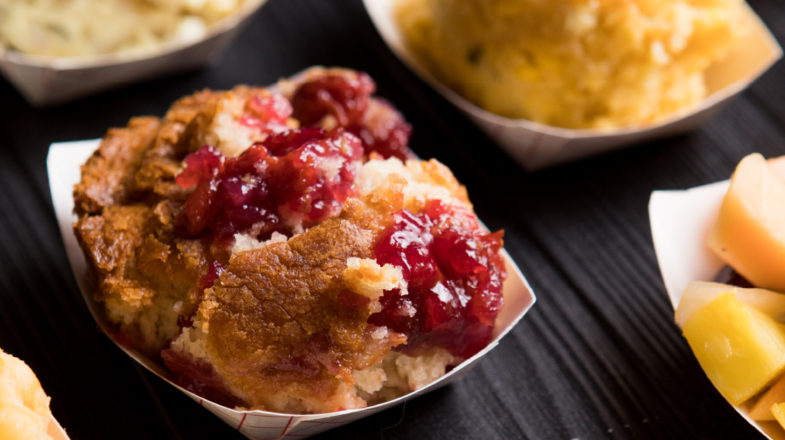 With Memorial Day just around the corner you might be on the hunt for backyard bbq catering near me in Austin. Fun fact: did you know May is actually national barbecue month? With the weather warming up the whole family will want to be in the backyard enjoying the sunshine. The only thing that makes a backyard picnic even better is barbeque, especially barbeque you didn’t have to cook. Pok-e-Jo’s takes the guess work out and takes your backyard bbq to the next level. 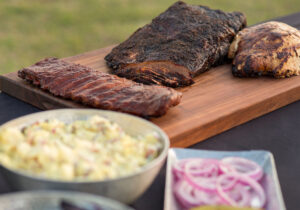 Think ribs, pulled pork, sausage, brisket, and so. many. sides. You’re sure to find something even the pickiest of eaters will love. We’ve got mac n cheese, green bean casserole, broccoli salad, and a potato casserole that’ll knock your socks off. The list doesn’t stop there! Finish off your bbq with a healthy slice of peach or cherry cobbler or a hearty scoop of banana pudding and you’ve got yourself a backyard bbq that no one will forget.

Backyard bbq catering near me with Pok-e-Jo’s means less time worrying about the food, more time enjoying the fam. Give us a call and we’ll walk ya through it. 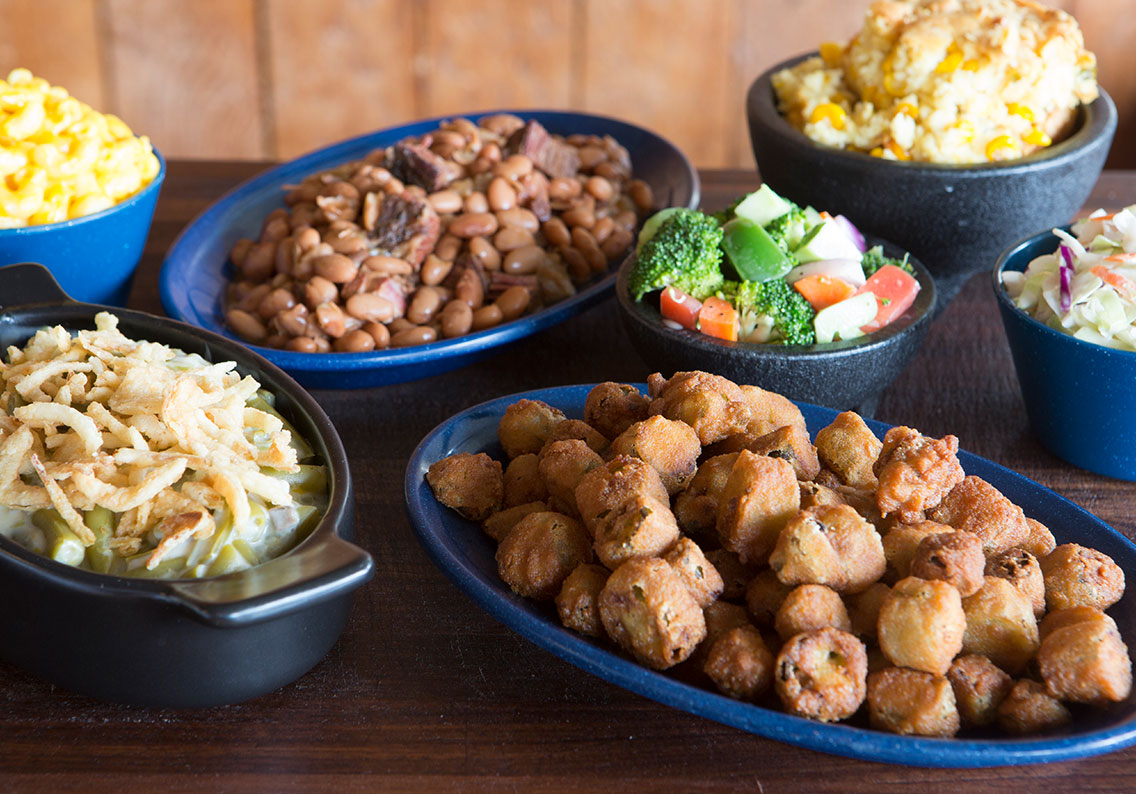 Finding Variety at BBQ Places Near Me in Austin

When I walk into most of the BBQ places near me in Austin, I pretty much know what to expect. A good variety of meats and the three standard BBQ sides: potato salad, coleslaw, and pinto beans. Don’t get me wrong, these three sides are great and are a big part of the tradition of Texas BBQ, but sometimes I’m just looking for a little something more. If only there was a place that I could go where the options of the sides to go with my sumptuous smoked meats are more than 3…

Oh, but what about Pok-e-Jo’s! With 5 locations around the Austin area, one of the BBQ places near me in Austin is almost always a Pok-e-Jo’s, and with 16 side options, I can go every day of the year and not get the same combination of items if I so choose. In fact, with 7 meat options and 16 side options, there are 10,752 combinations I could make on the two-meat plate. How is that for variety?

The variety of options at Pok-e-Jo’s doesn’t end with the sides. Feeling like going healthy, but still want that smoked meat taste? The Chef Salad gets you a big old salad with hard-boiled egg, tomato, cheese, Texas Toast as the croutons, a dressing of your choice, and a quarter pound of whatever meat you want. What about something a little off the wall or unexpected? Try one of the turkey pot pies with smoked turkey breast, carrots, and green beans in gravy beneath a flaky crust. You could even go with a BBQ sandwich or a baked potato with one the meats added. If there is a BBQ place near me in Austin with more variety, I haven’t found it. Stop in and try to count side options yourself–you’ll need both hands and to take off both shoes to get them all! 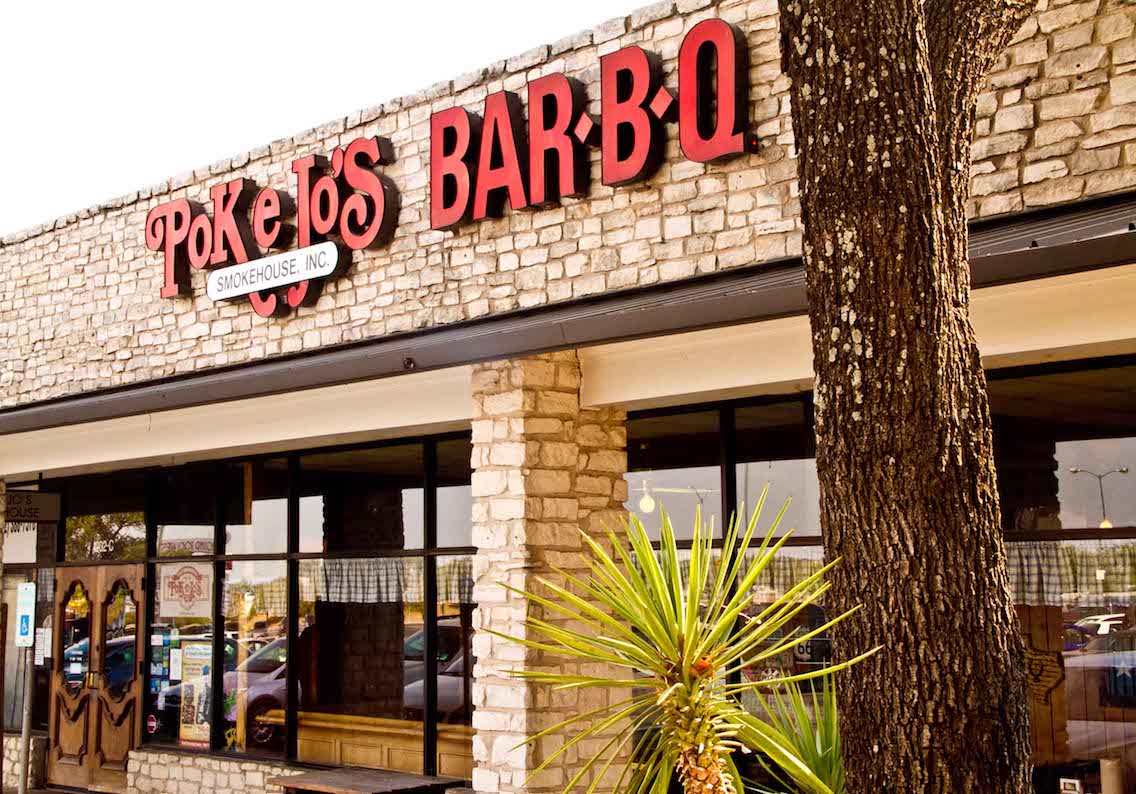 If you’re looking for help finding all of the Pok-e-Jo’s BBQ restaurants near me in Austin, you’ve come to the right place–the right website even!

Just scroll up to the top of the page to the top menu of the website and check out our BBQ Locations page. From there, you can see all of our spots in one map and enter your ZIP code to find the Pok-e-Jo’s BBQ restaurants near me here in Austin.

And once you find us, we will make sure some of our BBQ gets near you. On a plate. What you do from there is up to you! 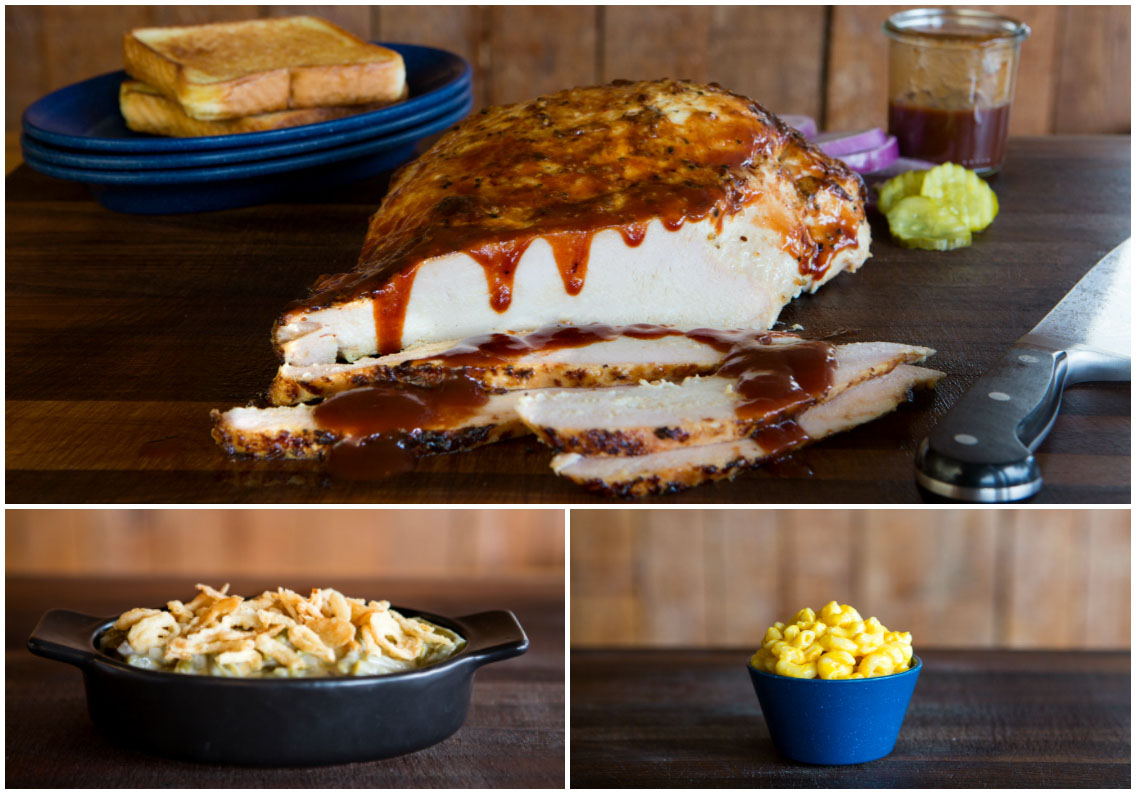 BBQ Restaurant Nearby In Austin

Let’s face it, you’re hungry. But it’s not just that regular ordinary type of hungry where just about anything will do. You have got that type of hunger where only one thing will satiate your desires. Nothing else will suffice. You’re looking for a BBQ restaurant nearby in Austin that has everything you could possibly want and more. Stop that search, friend… you’re looking for Pok-e-Jo’s. And you need it now!

When searching for a BBQ restaurant nearby in Austin, there are many things to keep in mind. Chief among those considerations, does this restaurant have all the proteins you could possibly handle? At Pok-e-Jo’s, you’ve got your choice of beef brisket, turkey breast, homemade sausage and chopped beef… but that’s not all. Unlike some local joints, you can also grab some spicy pulled pork, succulent pork ribs and our mouth-watering BBQ chicken. You’ll never want for options at Pok-e-Jo’s! And speaking of options, Pok-e-Jo’s has sides for days! Now we’re not just talking about coleslaw and potato salad, although those favorites are right here, too. If you’ve got a hankering for mac ‘n cheese, green bean casserole, jalapeño cornbread casserole and much more, we’ve got you covered “on all sides.” Didja get it?

Don’t wait another second. Quell the hunger within right now with a visit to one of our five area locations. When you smell that smoky aroma you’ll know you’re getting close, but if you don’t trust your nose, trust your browser. You can find a Pok-e-Jo’s BBQ restaurant nearby in Austin at https://pokejos.com/pokejos-barbecue-restaurants-near-me-best-bbq-places/. Find the location nearest you and be sure you bring a hearty appetite! We promise we’ll feed you till you’re not hungry anymore! 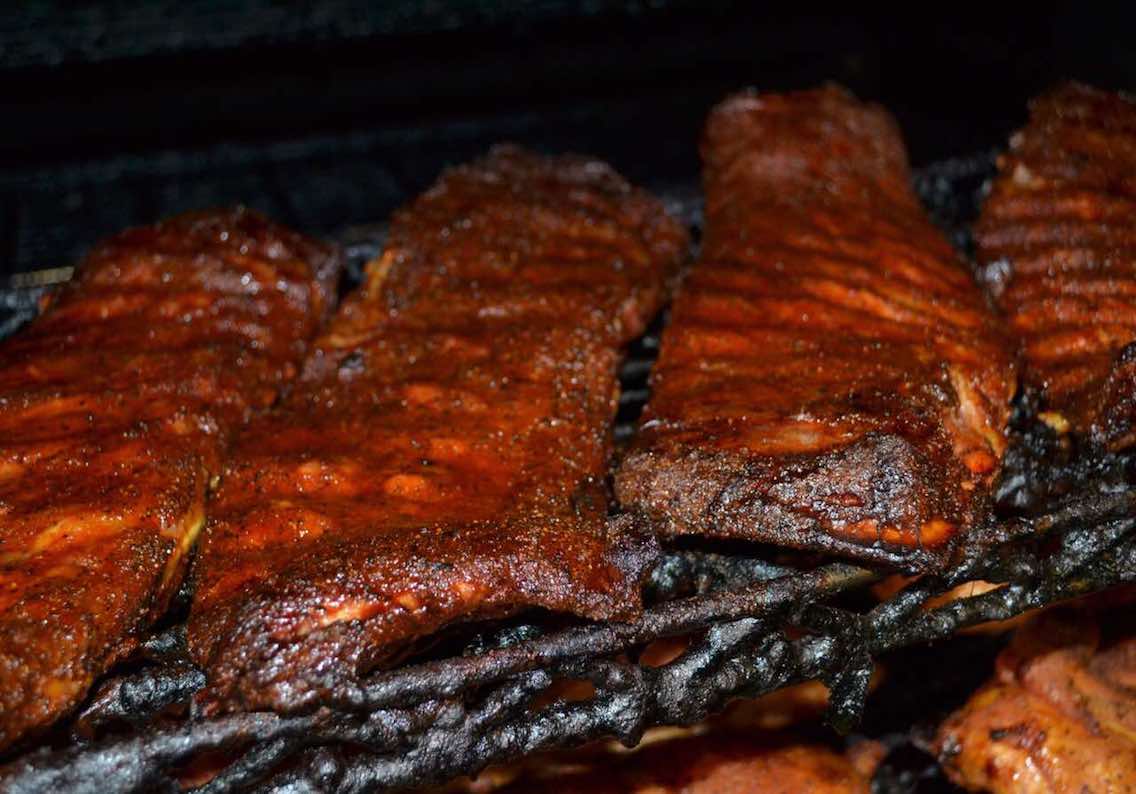 So Much Barbecue Near Me in Austin, How To Decide?

There are so many barbecue places near me in Austin, that one can hardly drive around the block without running into some of the city’s signature cuisine. Here are some good questions smart Austinites and BBQ lovers ask themselves:

1. Is it local?
2. How long have they been around?
3. Is there smoke coming somewhere from their building?

To answer questions one and two for Pok-e-Jo’s, we are still locally owned by the same families that first opened our doors back in 1979. That means Pok-e-Jo’s is local through and through, and is a long-time member of the BBQ community here in Central Texas. If these two things interest you, then no need to worry about the other barbecue near me in Austin; you can just go to Pok-e-Jo’s!

If there is smoke coming from the building, that tells you something important–that the restaurant you’re visiting is actually cooking their meat there on site. Not only do we at Pok-e-Jo’s smoke all of our meats at each of our stores every day, we also make all of our sides fresh every day. We are passionate about bringing that freshness and quality to our guests, and with our five locations, we put the “near me” in the barbecue near me in Austin!

Decisions can be difficult when there are so many BBQ places near me in Austin. Chances are that no matter where you are though, there is a Pok-e-Jo’s nearby to make that decision easier. We make that same great BBQ that started on the old Burnet Road in 1979 all over town these days-and even in Round Rock!

If you’re sitting there saying, “I live South, what BBQ places are near me in Austin?”, the answer is Pok-e-Jo’s Brodie Oaks. Central? Pok-e-Jo’s in the Hancock Center. North? You can get to our Parmer Lane store and our Great Hills store. We make it even easier for you North Austin dwellers.

So, your question of “are there BBQ places near me in Austin” can really be simplified. Next time, you just need to ask, “where is the Pok-e-Jo’s that I know is near me in Austin?”, and come on over to one of Austin’s long time BBQ institutions.

Barbeque Near Me In Austin: A Poem by Pok-e-Jo’s

The best BBQ Austin has to offer is obviously a subjective question – but we think we have the answer at Pok-e-Jo’s. There are many Austin BBQ restaurants that get a lot of press, deserved or otherwise. Basically, let ‘em have the press. People who are in-the-know already know that Pok-e-Jo’s is a not-so-hidden gem, with 5 BBQ restaurants in Austin, each serving the best BBQ Austin can find at a great price in convenient locations.

The best BBQ obviously starts with the meat. Sorry vegetarians, this section of the article is not for you. Our BBQ menu starts with beef brisket, every BBQ restaurant’s guiding force. Just looking at the smoke ring on our brisket tells the story. Perfectly seasoned, not too saucy, smoked to a nirvana of BBQ goodness. Also on our meat-n-great list is our homemade sausage, coming in the spicy or not-so-spicy variety. The sausage is a true gem at Pok-e-Jo’s, one often not given enough credit. Next on the list is our spicy Texas pulled pork. Eat it in a pile or pile it on a bun for an amazing BBQ sandwich. Then comes the smoked chicken, smoked turkey breast, and pork ribs like you’ve never had. Our dry rub is a little different than most, making our ribs truly unique.

For a quick BBQ and carb fix, try the Super Spud, a baked potato filled with a ¼ pound of meat and all the fixin’s.

Speaking of fixin’s, Pok-e-Jo’s fixin’s bar is the best in the business. Believe it or not, pico de gallo and sweet pickles are the perfect topping on smoked brisket.

The best BBQ Austin hot-spots have got nothing on Pok-e-Jo’s when it comes to the sides. It’s almost as if the great BBQ meats at Pok-e-Jo’s are just an excuse to order some jalapeno corn bread casserole…and baked potato casserole…and green bean casserole. This is good ‘ole southern cooking – pinto beans, mac’n cheese, and fried okra cooked to order, so it’s always hot and always fresh.

Top that BBQ feast off with peach or cherry cobbler or some banana pudding.

You’ll find the Best BBQ Austin has to offer at Pok-e-Jo’s 5 Austin restaurants: